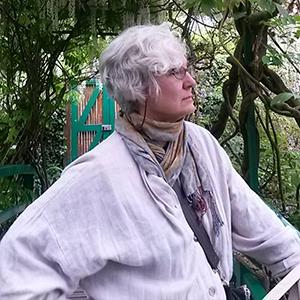 Miriam Wattles is engaged with grasping cultural transmission. She has worked on the making of an artist’s legend through various media during the Edo period (The Life and Afterlives of Hanabusa Itchô, Artist-Rebel of Edo, 2013) and, recently, on the internet-to-street movement of today’s memes (“Mocking Memes, Protest Memes, Mourning Memes: The Violence of Us & Them”). Her approach is inspired by theories of cultural memory, materiality, media, genre, and parody. Recently, she has been exploring shunga in relation to gender theory. Her next book traces the production and migration of individual copies of six books on manga, Toba-e, and giga originally published from 1720 to 1928, and complicates the present understanding of the history of Japanese comic forms; a related exhibition is planned for 2018. Her early research focused on Yokoyama Taikan and the rise of a Pan-Asian aesthetic that arose within nihonga in the late Meiji: "The 1909 Ryûtô and the Aesthetics of Affectivity," (Fall 1996). Before doing her graduate study at the Institute of Fine Arts (NYU), she lived for ten years in Japan immersed in the practice of calligraphy. In 2008, she founded Japanese Arts & Globalizations (JAG), an inter-campus research group in California.