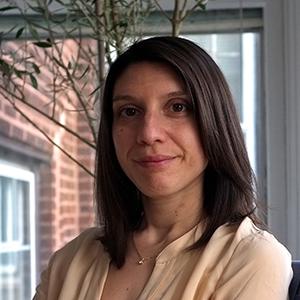 Heather Badamo writes on the arts of Byzantium and the East Christian world. Her research focuses on the intersection of Christian and Islamic visual culture, in particular the circulation of objects across the frontier zones of the eastern Mediterranean, with the related dissemination and transformation of artistic forms, ideas, and beliefs. Primary academic interests include theories of cultural exchange, philosophies of religious violence, art in war, and visual strategies for communal self-fashioning. Other interests are medieval image theory and the urban development of Cairo, and medieval North Africa. She conducts research in Egypt, Lebanon, Syria, Georgia, and Turkey. In 2005–2006, she participated in a conservation project led jointly by the American Research Center in Egypt and the Coptic Museum in Cairo.

Her book, entitled Saint George Between Empires: Image and Encounter in the Medieval East (Pennsylvania States University Press, 2023), investigates how different Christian and Muslim communities mobilized portraits of St. George to stake a claim to their place in a world of many faiths. It reveals how Franks, eastern Christians, and Muslims employed St. George to imagine sovereignty, orthodoxy, and communal belonging, blurring the boundaries between the foreign and the familiar, and transforming him into a universal hero. Her publications appear in The Medieval Globe, Gesta, and RES: Journal of Anthropology and Aesthetics. Her next book will consider the role medieval Coptic art and memory in the formation of communal identities.

“Depicting Religious Combat in the Thirteenth-Century Program at the Coptic Monastery of St. Anthony at the Red Sea

“Mobile Meanings: A Global Approach to a Medieval Dagger

2019-2020   The Global Turn in Premodern Art History
2017-2018   Topics in Medieval Architecture and Sculpture
2015-2016   New Approaches to Crusader Art and Architecture: Visual Encounters and Cultural Exchange in the Frankish Levant