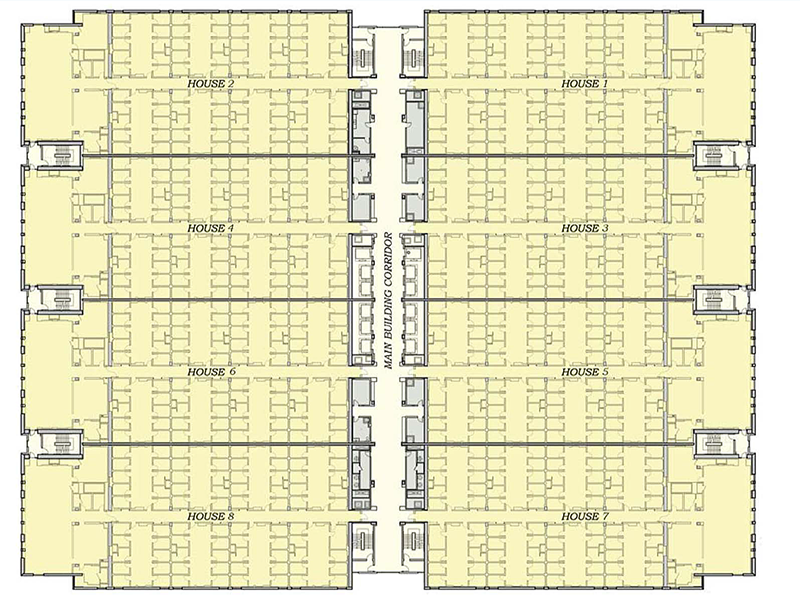 Presented by Richard Wittman, Associate Professor, Department of the History of Art & Architecture, at the UCSB Academic Senate Town Hall meeting on Monday, November 15, 2021, in collaboration with the UCSB Architectural Historians Group.

Thank you very much for the invitation to speak here today. Time is short, so I will dive right in.

is a highly experimental design based on completely untested theories

. It crams over 4500 young undergraduates into tiny windowless bedrooms at a density comparable to some of the densest urban concentrations in the world. And yet it claims that it will have beneficial effects on student well-being, and poses them no danger. What is the evidence for this claim? There is none!

Munger Hall is justified uniquely by the unsupported, fact-free assertions of the billionaire architectural hobbyist who conceived it. It cannot be said often enough: no serious supporting data has been brought forth to support the claims made in favor of this outlandish design. And yet UCSB is proposing not a small experimental building, but a pharaonic investment of $1.5 billion in what would be the largest dormitory building in the world. It is difficult to exaggerate how completely irresponsible this would be: to gamble on that scale on a project whose entire rationale is untested and which is regarded skeptically by an almost universal consensus of knowledgeable professionals. And to make that gamble with the wellbeing of our UCSB students.

This project is also a slap in the face to recent global efforts in the architecture industry to mitigate environmental degradation and climate change. A key tenet of those efforts is sustainability. Sustainability refers to passive strategies to reduce energy consumption, like considering sun orientation when siting, or being thoughtful about window placement; it refers to using renewable energy sources like solar and wind power, and low environmental-impact building materials. The current design of Munger Hall essentially ignores these strategies, for instance by shutting out the sunlight that is one of Santa Barbara’s most abundant natural resources.

Do not be deceived by the building’s LEED Gold certification. The LEED system is widely recognized as a problematic guideline that very often has more of a public relations value than a real connection to environmental outcomes. Munger Hall exemplifies this, as it is based on an outdated, unsustainable approach to building, in which the building fundamentally depends on mechanical systems to defeat and exclude nature, and to create an entirely artificial environment.

The design of Munger Hall is profoundly problematic in terms of our students’ mental and physical health. There is clear scientific evidence that a lack of natural light and ventilation has adverse impacts on human beings. (As the LA Times recently reported

, even prison design in the US is required to provide windows, as well as lower density.)

But also consider the COVID pandemic. Imagine living in a windowless cell, somewhere near the core of the most densely packed building you’ve ever lived in (or ever will live in), during a pandemic, when every knowledgeable party is telling you that the safest place is outdoors and at a distance from other people. Imagine having to quarantine for two weeks in such a windowless cell. Graduate students at Mr. Munger’s Michigan dorm building have had to do just this, and have spoken wrenchingly about the effect it had on their mental health. Being ill is never fun, but being ill in Munger Hall would be hell.

We know that there is a severe housing crisis in the Santa Barbara area. We all have students who have been unable to find lodgings, or who are even living in cars. We are not utopians who oppose Munger Hall out of obliviousness to the problem it is meant to solve. (And we certainly don’t oppose it because we are “idiots” or because we “hate billionaires,” as Charlie Munger has so charmingly alleged in his public remarks.)

Indeed, Munger Hall has already turned UCSB into the target of critical articles in all the major US papers and in many foreign ones too. My colleagues and I launched a petition about Munger Hall and received nearly 3000 signatures in a week! A petition by an undergraduate who targeted undergraduate social networks received over 12,000 signatures! Meanwhile, barely a single credible voice supports this design.

Our petition has had dozens and dozens of comments from past, present, and potential future UCSB parents saying that they would not allow their child to live in Munger Hall, or in some cases even to go to UCSB if Munger Hall were built. The message is pretty clear: the stakes are high; the leadership at UCSB needs to step away from this monstrous project, the sooner the better, before lasting damage is done.

Alexander Luckmann [HAA M.A./Ph.D. student], “Who Is Paying for the Public Life

Aaron Gordon, “A University Had a Legally-Binding Plan to Solve Its Housing Crisis. Then a Billionaire Stepped In

Juan Miró, "The Dark Side of Density: The Tragic Emergence of Windowless Bedrooms in the U.S.